Analysis of electrostatic interaction between ganglioside GM3 and transmembrane peptide (#603)

Theinsulin receptor is a single transmembrane protein that regulates blood glucose level. The reduction of sensitivity to insulin leads to type 2 diabetes. It has been suggested that the accumulation of ganglioside GM3 on cell membrane reduce insulin signal in type 2 diabetes. The interaction of GM3 with the insulin receptor is considered to be due to an electrostatic interaction between a sialic acid of GM3 and the lysine residue of the insulin receptor1)(Figure 1). However, the detailed analysis has not been elucidated.

In order to observe this interaction, we constructed a model system by incorporating fluorescently labeled insulin receptor transmembrane peptides into liposomes containing GM3.

Next, we synthesized the transmembrane peptide of insulin receptor. At the isolation of this peptide by HPLC system, the purity was not enough because of its hydrophobicity. We improved this problem by using the isopeptide method2). The synthesized peptides were incorporated into liposomes and observed by 3D imaging. As a result, it became possible to observe the phase state of the whole liposome which was difficult to discriminate by usual 2D imaging. We successfully constructed an evaluation system for detailed analysis. 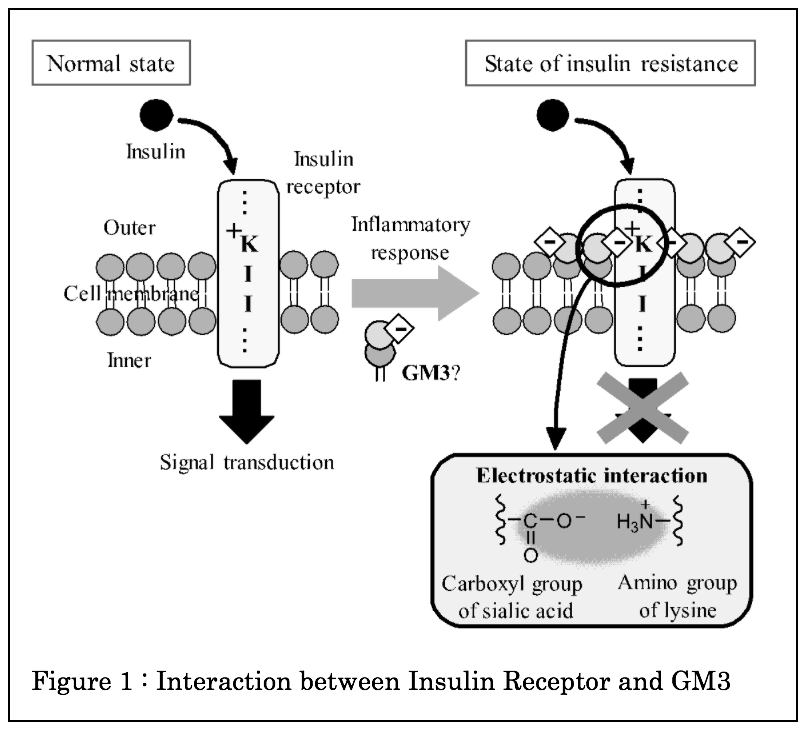